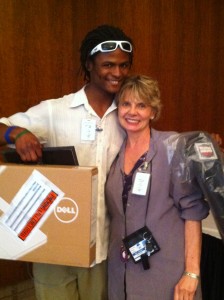 On May 1st, Strauss Troy’s Make a Difference (MAD) Team hosted 22 students and three teachers from Taft IT High School for the annual Freedom Writers competition.

The Freedom Writers program is based on the national model started by teacher Erin Gruwell in California. Working with “at-risk” students, Gruwell encouraged them to participate in a dialogue and write pieces based on their own lives and observations. Their anonymous articles were later combined in a book, The Freedom Writers’ Diary. Many of the former “at-risk” kids moved on to graduate high school, and some even attended college.

For this year’s topic, Taft students were challenged to reflect on safety in schools and to propose ways to better protect children from danger. Some of the students’ suggestions included: stricter gun laws, metal detectors and armed guards in schools, increased access to mental healthcare, emergency situation drills, anger management/bullying classes, and increased communication between parents and schools.

The MAD Team and Taft students enjoyed learning about the history of Cincinnati on the Queen City Underground Tour, followed by lunch at Strauss Troy and an awards ceremony. Dr. LaVaughn Henry, vice president and senior regional officer of the Cincinnati branch of the Federal Reserve Bank of Cleveland, spoke to the students. Dr. Henry encouraged the teens to learn as much as they can, and to be open and ready for any opportunity that may come their way. He emphasized the importance of starting a budget, and he stressed that the decisions they make now, and the relationships that they build today, will impact them for the rest of their lives.

Each student was awarded a certificate of achievement, and the top five writers received $50 gift cards. Congratulations to Calvin Sims, III, a junior at Taft, for his leading essay, How to Keep Our Children Safe from Violence: What Have We Done? Sims received a Dell laptop computer and Swiss Gear laptop carrying backpack for his writing.

During its 60 years, Strauss Troy has earned a reputation as a strong supporter of the Greater Cincinnati and Northern Kentucky communities. This is the firm’s 8th year of sponsoring this program, designed to encourage the pursuit of higher education in the field of Information Technology.