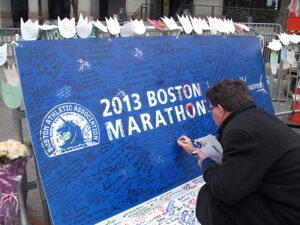 The recent arrest of the living Boston Marathon bomber has raised a tough constitutional question – is he entitled to warnings under Miranda v. Arizona? Dzhokhar Tsarnaev was questioned for 16 hours before he was given the warnings. Tsarnaev is an American citizen, arrested in America, and it would be difficult to consider him an “enemy combatant,” which could lead to him being detained indefinitely without any rights. The Obama administration is not considering him an enemy combatant. He is being treated as a criminal defendant, with due process rights, and he is in the criminal justice system, just as other U.S. citizens accused of terrorism have been.

The Tsarnaev case raises the question of the “public safety” exception to the Miranda rule. In the case of New York v. Quarles in 1984, the Supreme Court held that police could question a person without the Miranda warnings so long as the questions are focused on, and prompted by, a concern for public safety. In the Quarles case, a man who was suspected of being armed was arrested for rape, and he was found to be wearing a holster that was empty. When he was arrested, he was questioned about where he had put the gun, and he answered the question. The police used his statement to locate the weapon. When the man was then prosecuted for possession of the gun, his statement was used against him. The Supreme Court held that the question was appropriate because it was directly related to a concern about the gun and protecting the public from the possibility of violence involving the man who was arrested.

In the case involving Dzhokhar Tsarnaev, it’s a near certainty that the trial Court will be asked to exclude any statements that he made before he was given Miranda warnings. The Court will be asked to determine whether the questions were designed to address a public safety concern. Such a concern could be whether there were others who helped the Tsarnaev brothers (who may be plotting other crimes) and whether there were other explosive devices in the community that needed to be located and disarmed. If the statements were taken in violation of the Miranda case, then they will be excluded from evidence – unless Mr. Tsarnaev should decide to take the witness stand in his trial and say something different from what he told the FBI.

Without knowing the exact questions that the FBI asked Tsarnaev, it’s hard to say how a Court will rule on this issue. If the questions were designed to obtain evidence about other people who may have conspired with the brothers, or about location of other bombs or explosives, the statements made by Mr. Tsarnaev will likely be admitted into evidence. If, in the midst of answering those questions, Mr. Tsarnaev also confessed to planting the devices on the day of the marathon, then the prosecution’s job will be very easy.