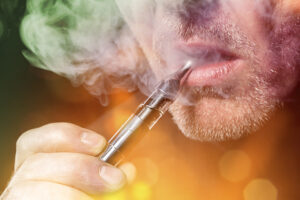 Recently, DC Comics formally opposed trademark registration of KRYTPONITE VAPOR by Ravensmoon Productions.  Ravensmoon filed the mark in a class that covers electronic cigarette refill cartridges. The group has distributed Kryptonite Vapor product from its website since 2013, as well as in retail establishments. Knowing it can’t fight a super power, on Instagram the company referred to the product as “Ravens Moon Vapor formerly KRYTPONITE VAPOR.”

According to our friend, Michael Lee over at the Pirated Thoughts blog, DC Comics has also filed for extensions to oppose Chevy’s use of the term in the automotive class.  The U.S. Patent and Trademark office looks to determine if names are “confusingly similar.”

Superman was introduced to us in 1938, that special KRYPTON and KRYPTONITE trademarks started being used in 1943.