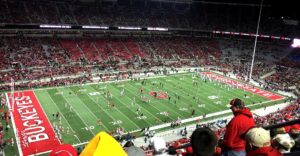 Let us know what you think. Vote in our quick poll:

Not only is The Ohio State University famous for football, but also for being extremely protective of its trademarks. The Buckeyes’ century-old Ohio Stadium up in Columbus is nicknamed the Horseshoe for its distinctive shape — and often further abbreviated to “the Shoe.”

Now, the university has dropped the other shoe against Caesar’s Entertainment which owns the Horseshoe Casino in Cincinnati, Ohio. Caesar’s  filed a trademark registration for “The Shoe,” as the name of its Cincinnati casino concert venue. Caesars is seeking to register a plain-text version of the name and a logo for “live visual and audio performances.”

OSU seeks to block Caesars’ application, saying the two are direct competitors because both hold concerts at their venues.

Should the university have thought more broadly about its intellectual property protections? It registered “The Shoe” as a trademark in 2006 and has used the name “on various articles of clothing, toy collectables, photographs and artwork since at least as early as 1996,” OSU said in its filing.

The contention is that concerts put the casino’s Shoe in competition with OSU’s Shoe. In addition to hosting football games, Ohio Stadium “has also hosted musical performances since at least as early as 1988 … including the Rolling Stones, Pink Floyd, Genesis and Billy Joel,” OSU says in its filing.

The casino has held numerous concerts starring performers such as Willie Nelson, Earth Wind & Fire, Chicago, Alice Cooper, Huey Lewis & the News and other musical acts, OSU said in its filing. The casino, which is jointly owned by Caesars Entertainment Corp. and Cleveland Cavaliers owner Dan Gilbert, is due to respond to the filing by the middle of December.

OSU has trademarked the name Brutus and the block “O” logo and also recently secured trademark designation for the name Urban Meyer.  According to the Columbus Dispatch, trademarks for “Urban Meyer” and the phrase “Urban Meyer Knows” were issued on July 7 and provide protection on clothing items for men, women and children, and namely hats and T-shirts.

Protecting your intellectual property rights might include things beyond the name of your business or product. Strauss Troy Cincinnati Business and Intellectual Property Attorney Corey Hamilton can answer your trademark questions and secure your brands. You can reach Corey at schamilton@strausstroy.com or call 513-621-2120.