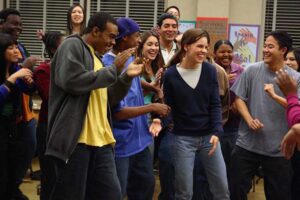 In May, Strauss Troy is proud to once again sponsor the Cincinnati Freedom Writers Project. While some of the groups are an outlet for self-expression or exploring career options, the creative writing group — the Freedom Writers — read books, learn to relate to them and are then encouraged to pen their own essays about the issues that affect their lives the most, ranging from the most superfluous (dating, school life and cliques) to more dire and pressing issues (gangs, drugs, racism, suicide and death).

The program is based on the national model started by teacher Erin Gruwell in California. Working with “at-risk” students, Gruwell encouraged them to participate in a dialogue and write pieces based on their own lives and observations. Their anonymous articles were later combined in a book, “The Freedom Writers’ Diary.” Many of the former “at-risk” kids moved on to graduate high school and some even attended college.

“The goal of Teaching Hope is to call attention to how schools can be involved in making social justice a priority for the health and well-being of our region,” according to Mark Kohan, who serves as coordinator for the Cincinnati Freedom Writers Project.