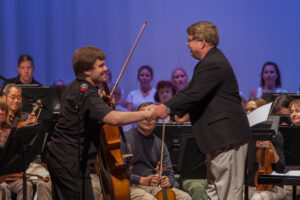 Now He Heads To Beijing, China
And The Juilliard School

In case you missed the Kentucky Symphony Orchestra’s July 6 concert, we wanted to tell you about Cellist Benjamin Fryxell, who made his debut with the KSO and received multiple standing ovations.

The 18-year-old has been accepted at the Juilliard School in New York City to study cello performance this fall. Right now, he is headed to Beijing, China’s National Centre for the Performing Arts, where he will perform Tchaikovsky’s “Pezzo Capriccioso” with the orchestra at the Great Wall International Music Academy.

Ben has been praised for his beautiful tone, compelling interpretations and dazzling technique. A student of Cincinnati Symphony Orchestra’s Alan Rafferty, he has also worked with Lynn Harrell, Timothy Eddy, Ralph Kirshbaum, Alice Ann O’Neill and with members of the Emerson and Orion string quartets. Ben has performed with the Blue Ash-Montgomery Symphony, the Blue Ash Youth Symphony, the Seven Hills Sinfonietta, and the combined forces of the Cincinnati Symphony Orchestra and the Cincinnati Symphony Youth Orchestra as the grand prize winner in their 2012 concerto competition.

Strauss Troy is honored to serve as a sponsor of the Kentucky Symphony Orchestra and introduce you to great music and great musicians like Ben.