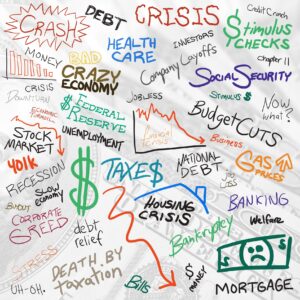 By now, you have no doubt heard about the looming “fiscal cliff.” However, there is another threat on the horizon that has an even more immediate impact… “Taxmageddon.”

Taxmageddon is the term being used for the increase in marginal income tax and capital gains tax rates effective in 2013.

Low tax rates enacted in 2001 and 2003 are set to expire on December 31, and $100 billion in automatic fiscal spending cuts are scheduled for early January. Nevertheless, lawmakers have gone home, and put off any action, until after the November 6 elections.

According to Reuters news service, Federal Reserve Chairman Ben Bernanke cautioned Senate lawmakers on the economic dangers of the looming “fiscal cliff,” referring to the nearly $600 billion in planned spending cuts and tax hikes that will hit at the start of next year.

In a closed-door meeting, Chairman Bernanke told members of the Senate Finance Committee that the Fed could not solve the economy’s problems alone. “If the fiscal cliff isn’t addressed, I don’t think our tools are strong enough to offset the effects of a major fiscal shock,” he said at a news conference in mid-September.

Here Are The Major Changes Occurring On December 31

“You can view this impending increase as doomsday, or you can take a more active approach,” said Tom Rink, chairman of Strauss Troy’s Tax Department. “There are a number of opportunities to reduce the risk of increased tax burden by taking steps in 2012.”

Should you wait and see? Some advisors might encourage you not to take any action and wait for legislators to enact favorable legislation. With our current political and economic climate, however, the uncertainty over the 2013 tax regime is likely to lead to a harsher tax climate next year and beyond.

Even if the political winds sway in favor of reducing taxes, Congress would need to act quickly to effectuate any changes immediately following the November election — not something taxpayers can count on.

While not associated with the expiring tax cuts, the Affordable Care Act (ACA), which the Supreme Court mostly upheld this summer, carries an additional 3.8% Medicare surtax on net investment income and gains. To avoid this tax, consider disposing of real estate and other investment assets that have significant gains. Obviously, this only makes sense if you want to sell investment property, but it’s also a wise strategy if you have assets with significant gains that you may want to realize in the near future.  Even if the tax cuts are extended, it is unlikely that the 3.8% surtax will be struck down.

“You need to ask yourself if it is riskier to let things ride, or to accelerate gains and pay taxes now. If you think you will have transactions in 2013, you may want to turn these around yet this year,” Tom Rink said.

For most, accelerating gains and paying taxes can be a risky proposition, but transactions that are planned, and highly likely to occur in 2013, should in most cases be evaluated for quicker turnaround in 2012.

“Unless you have a compelling reason to wait until 2013, you’re at risk of incurring a larger tax burden on the same transaction,” Rink explained. “We can help you evaluate whether it is better for you to accelerate gains to 2012, and defer available deductions to 2013, to increase their impact.”

If you’re a business owner, you will want to evaluate the possibility of making distributions this year to avoid increased taxes on distributions made in 2013.

If no action is taken, taxpayers at each tax bracket face a larger tax bill in 2013.  At this point, the Bush-era tax cuts will sunset without any legislation to reduce the impact.

Without action from Congress, the preferential treatment of dividends will be eliminated, and they will be taxed at ordinary rates in 2013. The top rate for capital gains would jump five percent – from 15% to 20%. Finally, these gains would also be subject to the 3.8% Medicare surtax as provided for in the ACA.  Altogether, this rate change could affect many individual taxpayers.

“Even if one is hopeful that the tax laws will be changed, or an agreement will be struck, it is essential to establish a game plan in the event that the tax cuts are not renewed for 2013,” said Joy Hall, a tax and compliance attorney at Strauss Troy.

If you are concerned about the size of your estate, and the possibility of a large estate tax burden in the future, the lifetime exemption has never been better than it is right now. This is your opportunity to make lifetime gifts utilizing this unprecedented exemption before it ends December 31, 2012.

If you have assets that you are considering passing down to future generations, you may want to act now. Most families would rather see a larger portion go directly to family members than to government taxation.

Schedule your appointment now to talk with your Strauss Troy tax and estate planning attorneys about how to develop a strong plan to minimize your tax burden for year-end and 2013. You can read their attorney profiles here or call our office at 513-621-2120.